Crafts and traditional arts of Iran have long been influential in the ancient civilization. Now, Six Iranian cities and one village have been listed among the craft cities of the World Crafts Council – Asia Pacific Region (WCC-APR). According to official data from Iran’s handicraft deputy, 400,000 people are engaged in various crafts, and last year, $ 281 million worth of handmade handicrafts were registered through customs. Along with the fact that foreign tourists traveling to Iran always buy one of these artistic and fine artworks of Iran as a souvenir.

The deputy director of Iran’s Cultural Heritage, Tourism and Handicraft Organization, Pooya Mahmoudian explains in an interview with the  on handicraft development perspectives.

Ms Mahmoudian is graduated at the MBA from the Tehran`s Sharif University and has completed her Doctor in Business Administration with an entrepreneurial orientation from the University of Bordeaux in France.

Iran recently hosted the 40th World Tourism Forum in Hamadan. What will be the outcome of this summit for Iran`s handicrafts?

The 40th World Tourism Forum (UNWTO), held in Hamadan,  I had several meetings with zurab pololikashvili, Secretary-General of the World Tourism Organization. pololikashvili and other guests were astonished at the high and rich capacities of Iranian crafts. This opportunity is available to Iran to host the World Handicrafts and Tourism Summit in near future.

Boutique hotels are expanding and Iranian handicrafts are displayed at these unique resorts. The largest boutique hotels are located in Kashan. A privately owned boutique hotel will be opened in Tehran’s nofel -loshato Avenue, which is considered to be the most beautiful collection of private sector crafts as well.

Another booming factor to the supply of handicrafts is a concept called “Iranian Home”. From the smallest items to the largest, all representing Iranian art and crafts. A bedroom, a living room, just a power outlet, a sink that is made from copper or pottery is very beautiful are made locally with a concept of presenting Iranian art.

In each province, an Iranian Home will be exhibited. The first priority is the creation of an Iranian Home in Tehran because trade delegations travel to Tehran and It is important for us to provide the aesthetic feel to Iranian art.

The constructors of Tehran’s large complexes are committed to using the style of Iranian arts and handicraft in the interior design of these structures. These fine arts are also being developed in the lifestyle of wealthy individuals as well as applied in the homes of indigenous people.

Six Iranian cities and one village have been listed among the craft cities of the World Crafts Council – Asia Pacific Region (WCC-APR). Whether a region has got such a credit for globalization, what qualities are needed and which criteria are chosen?

To be listed as a World Crafts City (WCC), International valuers should be sure of having a set of indicators. Such criteria include the number of handicraft workshops in the city, the number of handicraftsmen. The family economy and livelihoods of the people of the area should also be supplied with handicrafts, the contribution of handicrafts to the economy of that village or town should be significant, innovation and creativity in the products of that city or village, the number of galleries, museums Exhibitions that are held continuously or temporarily throughout the year, the number of permanent and temporary markets will all be at its best.

Since the village of Kalporgan in the province of Sistan and Baluchistan has been listed on WCC, there has been a twofold impact on the households economy as well as the prosperity of the local village income. Because one of the goals of  WCC has been the branding. The selection of the world’s largest handicrafts house will mark the region as a global brand. either in the field of tourism, or in the sphere of commerce, sales, and production, the global attention are attracted to this region.

The distinguished area remains of interest to the world in the field of tourism and trade as well as sales and production.

Iran’s World Craft City has won the world’s first rank and even surpasses China and India, is one of the strengths and authority of the Islamic Republic of Iran. The influence of Iranian crafts in the world is appreciated and valued. This is believed by all the assessors of WCC-APR.

With the approval of the WCC-APR assessors, the city of Meybod as the world’s largest city of Zilu, the city of Abadeh as the universal city of the embankment and the village of Khorashad in South Khorasan Province as the world of Toobaffi (traditional weaving) and towels in the global registration waiting list.

Some of the Iranian artworks granted Award of Excellence. What are the distinctive features of the artwork, in comparison to other similar artistic products, and what does the Award of Excellence offer a special benefit to an artist?

In order for an artistic product to receive Award of Excellence, it is first necessary for the judges and experts to evaluate the product globally. Among the important features of obtaining this international credit are the following: product availability, diversity, creativity and innovation, competitive pricing and supply power in an international market, the use of natural and environmentally friendly materials, labour rights and Personnel.

Once these qualities have been acquired, international referees will decide if these goods are worth to obtain the Award of Excellence or not. Those who receive such credit can sell their products in international markets efficiently.

It is interesting to the magazine’s reader that how they can contact exporters to buy Iranian handicrafts products if they do not travel to Iran? Is it possible to order online?

Now, more than 200 online stores sell Iranian handicrafts across the country. Iranian artists in the field of online e-commerce sites have worked very well and domestically have great sales. 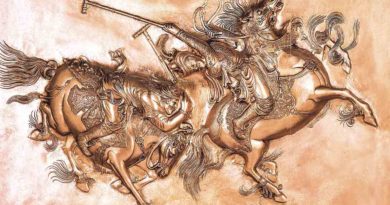 The Glory of Persian Art