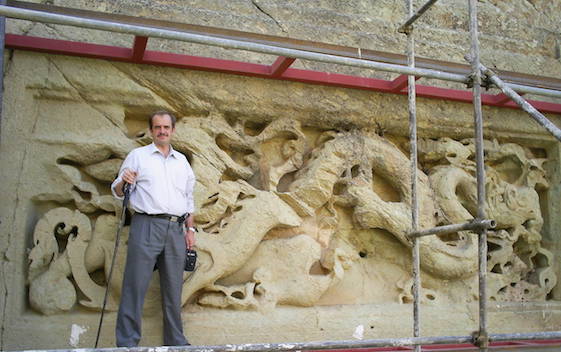 In the domain of Zagros Chain Mountain, there is a wonderful ancient temple in the rocks with two dragons on its sides like two horrified guards that usher you inside.

The Dragon Temple has a rectangle plane and the native people named it “Shirin and Farhad” which were Iranian lovers like “Romeo and Juliet”. Many ancient mountain sculptures in Iran are named from these two lovers which has deep roots in Iranian myths. The Dragon Temple also named Dashkasan which is a Turkish word meaning cutting stone.

The Zagros Mountain chain is the mother of Iranian civilization.  Likewise, April is the most beautiful month there. Everywhere it is green and all covered with flowers with special lovely scarlet copses.  The mountain peaks are covered by white glaciers, with shiny sunlight in a blue sky which includes some scattered cumulus clouds. They create one of the most fantastic fantasy views that you can imagine. At the same time, friendly birds sing in tree blossoms while noisy lambs scamper in the hayfields. The magic of nature is completed by the voice of roaring moving watered and seasonal waterfalls you can hear everywhere.

The land of the largest Oak forest in the world and the land of Rock, which is the echo of animal voices in their marriage season in the spring break gives a horrifying mountain silence. Zagros is the land of music.

Everywhere in this area is full of mystery. There is a rectangular pond at the entrance. All around the dragon temple are beautiful sculptural flowerers around three similar manmade arches. The most important part of the temple sculptures are two five meter symmetric dragons in front of each other on the side walls. Symmetricity is the most important factor in ancient Iranian arts.

The secret behind these sculptures make the Dragon Temple a mysterious one. Scientists and archeologists believe that the dragon temple originally was a Mitra temple. Mitra was the ancient Indo-Iranian divinity god.

Dragons in Iranian culture and snakes in Mitraism have basic and effective rolls. All around Iran, you can see footnotes of the dragons in native cultures. For example, in south west of Iran, there is a boiling tar fountain that people believe is the blood of the dragon which was killed by Iranian immortal hero, Esfandiar. Here, two dragons direct you inside the temple like two guards. There is another Mitra temple in North West of Iran with a similar plane; although it has no dragons.

In the Mongol area, there is the Ilkhan dynasty, Iranian and Chinese artists renew the temple and added more sculptures in addition to the two dragons, which was near the new capital. They cut green stones from a mine near the temple to make the kings palace. This temple shows Iranian art in 13th and early 14th century. After the Mongol attacked and destroyed the known world, millions of people were killed, Iranian art was shown like a phoenix rising.

The dragon temple is one of the best kinds of Iranian sculptured architecture; and so the only one which is mixed with artistic creations Iran and China.